At 68, Devendra Patel reads 4-5 hours daily, which includes 25-30 newspapers. He watches television for two hours and keeps himself updated with national and international news, ranging from Barack Obama and Manmohan Singh, to Bipasha Basu and Katrina Kaif. Mr Patel, Advisor to the Editor and columnist for Gujarati newspaper Sandesh, was recently awarded Padma Shri in the discipline of Literature & Education.

“I was elated at the announcement. I am not a hypocrite to say that I did not feel good. Naturally, it feels good,” he said. Mr Patel who was born on October 20, 1945 in Gujarat, began his career as a journalist began in June 1967, when he joined Gujarat Samachar as a reporter. It was actually by accident that he chose this career. “I was to join the Intelligence Bureau, and could not go because of some reason. I was desperate to work, and joined this field. It was a dramatic incident,” he shared.

Mr Patel maintains that he does not have any idols or role model in journalism that he followed, but he was impressed by Mahatma Gandhi and his journalistic efforts and launguage. “I was only influenced by Gandhiji indirectly, not as a journalist,” he clarified.

Mr Patel has written “lots of stories”, but he gave prominence to human interest news stories. He recalled, “Some hardcore criminals of Dadva village inBhavnagargang raped one 19-year-old female, the young wife of atemplepujari(priest), burnt their house and shop and ultimately forced them to leave the village. The policed refused to lodge their complaint and the couple came to Ahmedabad to commit suicide in theKankariaLake. Before doing so, they came to Gujarat Samachar and told me the whole story.” Gujarat High Court took note of the story and sent a notice to the Gujarat government suo moto. The government had to act and more than 12 culprits were behind bars within 24 hours.

The woman became the sarpanch of that village later. “Back then, I used the name of the woman and even her picture in the story I filed. The story created quite a stir. In those times, SC had not ordered yet that the victim’s name and identity cannot be revealed,” he said.

Thirty years ago, Mr Patel through his articles alerted parents of girls against fraudulent US green card holders who used to cheat the cultured, educated Gujarati girls through marriage. “More than 50 cases came to me. I wrote every story. The same is happening inPunjabnow. But after I published my stories, the educated girls no longer got excited by the prospect of getting married to a green card holder. Now, parents are also cautious about NRI boys who want to get married to Gujarati girls,” he said.

But the good work comes with various bad experiences as well. Mr Patel recalled, “In 1985, the students of the B.J.Medical College started ‘Anti-reservation movement’. The Madhav Singh Solanki government wanted to crush this movement aggressively. The police started torturing innocent people by baton charge and firing. I started a column ‘Wohi Raftar’ against this torture in Gujarat Samachar, which was the true reflection of the people’s mood in Gujarat. It became ‘the voice of Gujarat’ ultimately. This made some elements furious and irritated and as a result, they set Gujarat Samachar press on fire. However, the daily began again after 15 days and I wrote, ‘We will write from the ashes of Gujarat Samachar’. The Madhav Singh government desperately wanted to put me behind the bars and I had to go hiding with my family for 15 days. However, the Delhi high command had to take serious note of this and ultimately Madhav Singh was forced to resign as the chief minister of Gujarat.”

It was in December 2007 that he joined Sandesh as the advisor to the Editor and column writer and very soon, became an integral part of the ‘Sandesh’ family. In his career spanning 42 years, Mr Patel has penned 40 books apart from two books in Gujarati on America’s war onIraqtitled ‘Gulf War’ and ‘Saddam Hussain’. His book ‘Israel: the land of the Bible’ received the Best Book award by Gujarat State Sahitya Akademi. In 2009, he got the Best Writer award by the Trans Media, Mumbai, for the TV serial ‘Kabhi Kabhi’ on Zee Gujarati. 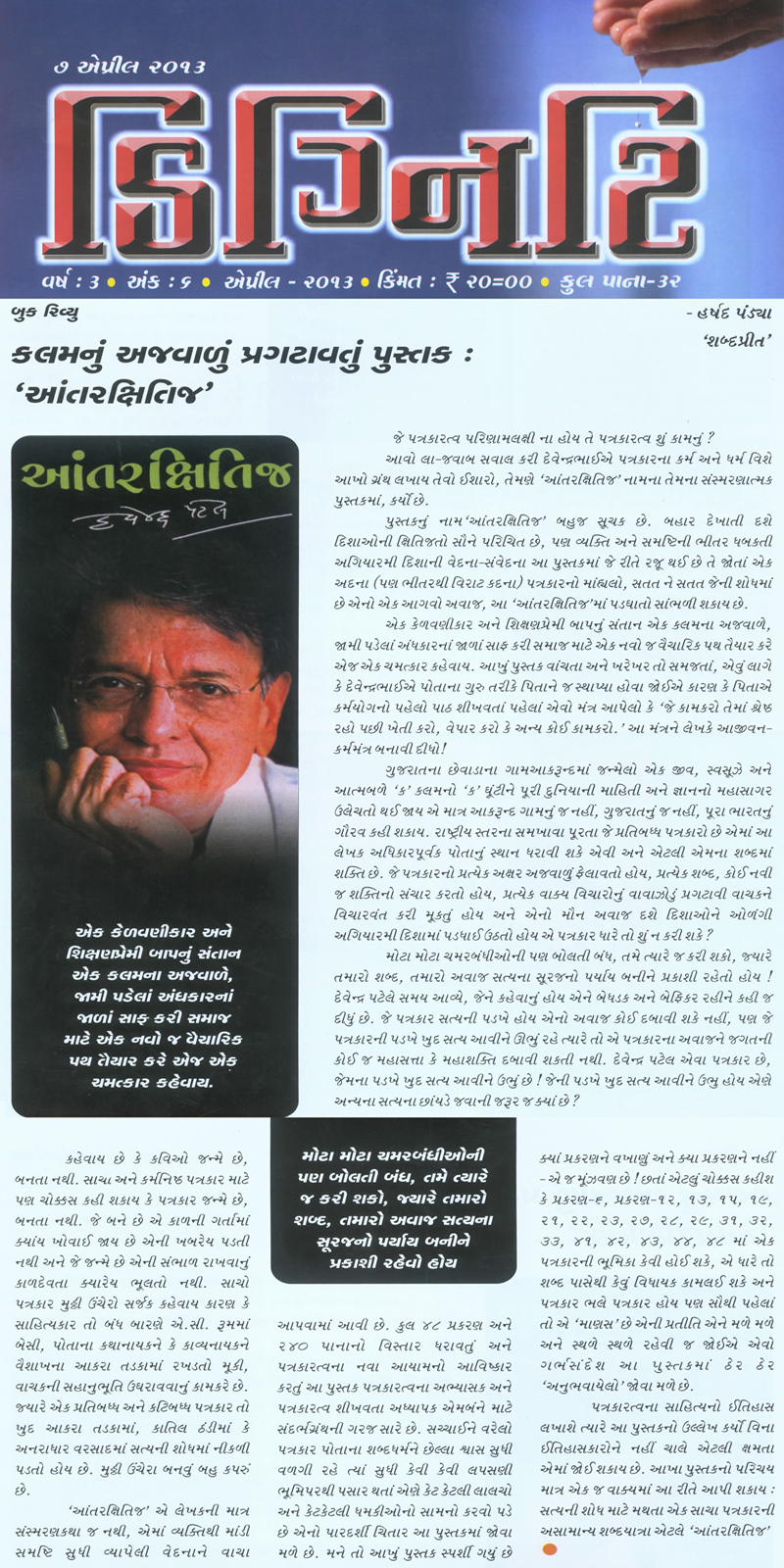